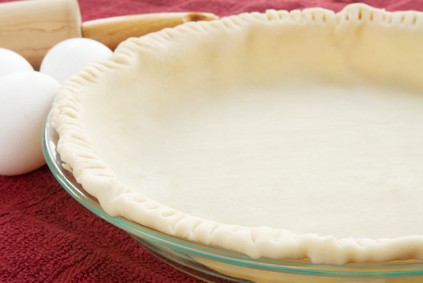 I have a confession to make. Pie crust intimidated me for many years. I never actually witnessed my own mother make pie crust, and when my Granny made it, it seemed to just magically appear on her rolling pin. So many recipes were unavailable to me though, as long as I avoided pie crusts, that finally, I decided I would just learn how to make it. That is when I discovered the secret: The crust is easier to manage when it is rolled out between waxed paper or pastry cloths. Eureka! With this one discovery, I have taken the pie crust bull by the horns and made it my own. Pie crust is fun and easy for me now. And if I can tackle this small bit of culinary success, believe me, everyone can.

Now, use a fork or your fingers to mix the fat into the flour. You don’t want it too well mixed, but it should be in small crumbly pieces. Then add your water. Mix the dough up with the fork, or your hands until it forms a ball of dough. Knead it a few times to make sure it holds together well. Add a little more water if you need to.

Let the extra crust hang over the sides of the pan. Roll out the other half of the crust the same way you did the top half. You can reuse the same waxed paper. When the second crust is thin, set it aside.

Fill up your pie crust, using the filling of your choice. Mound the fruit slightly in the center if you like a pretty peaked top on your pie. Loosen both layers of waxed paper on the second crust. Remove the top layer of waxed paper, and carefully invert the crust on top of the pie filling. Remove the final sheet of waxed paper and toss them into the garbage. Trim the crust so it extends about 1/2 an inch beyond the rim of the pie pan. Cut and paste with any dough scraps if you have thin spots. Fold the edges of the crust under and crimp them with your fingers or a fork to seal the edges. I flute the edges by pinching them with my fingers into a pretty rim, but this is not necessary. It is pretty easy though, with a little practice. Like playing with play-dough almost. Cut slits in the top of the pie for steam to escape. Bake as directed.

For a single crust pie, just cut the recipe in half. Or make the whole recipe and refrigerate or freeze the other half for later. To pre-bake a crust, bake it at 425° until it is golden brown, about 10 or 15 minutes. Poke it all over with a fork before baking to prevent air bubbles from forming.

This is much harder to describe than to actually do. I was very clumsy about learning this skill. My pie crusts are not fancy, they are sturdy. I do not make the most tender flaky crust on the block, but if I can figure out how to do this, then anyone can. This recipe is exceptionally easy to handle, and the waxed paper method really lightens the task. I now consider pies an easy and quick dish. I didn’t always, but practice really makes all the difference. Lard and animal fats make flakier crusts than vegetable shortening. Vegetable shortening still makes a very good pie crust though, and no animals are harmed in the making of it.

I’ve made reusable pastry cloths from hemmed pieces of old pillow cases or sheets. Cut them about 18″ square and hem or zigzag all the edges on the sewing machine. Then use them just like the waxed paper and toss them into the washer when you are done. They actually work better than the waxed paper, and are much cheaper and more ecologically friendly.

All-purpose white flour and unbleached white flour both make very tender pie crusts. Whole wheat pastry flour, made from soft wheat also makes a very tender, flaky crust. Plain whole wheat flour, or whole wheat bread flour makes a sturdier crust. I like sturdy whole wheat crusts on pot pies and quiches, but it takes kids a while to get used to them. 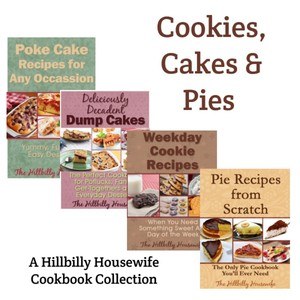 This is a collection of four of my most popular baking cookbooks. All recipes are easy and fun to make. Bake up some warm and gooey cookies, make a few pies for the holidays, or try your hand at some fun dump and poke cake recipes. You’ll find plenty of ideas for the next bake sale, family gathering, or a homemade treat for the family.

Get it on Amazon.